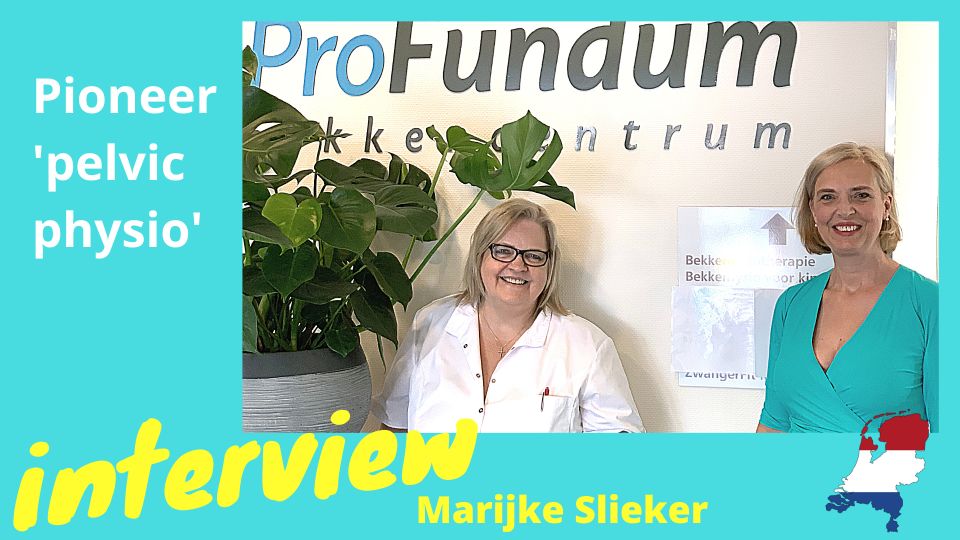 Marijke Slieker is a well-known pelvic physiotherapist in The Netherlands. She was for instance involved in the organisation of the first full course and in creating a second full pelvic physiotherapy course (both MSc) in The Netherlands, and was an active member in several committees in the International Continence Society (ICS). Recently she received a royal distinction (Officer in the Orde van Oranje Nassau) for her (voluntary) work both nationally and internationally.

Marijke got interested in the pelvic floor in the late 1980’s after she gave birth to her children. Like many colleagues she started with pre- and post-natal care. At the first course  introducing myofeedback and electrical stimulation she met her colleague and friend Fetske Hogen Esch with whom she developed and organised a lot of courses, workshops, symposia both nationally and internationally. At that time an internal investigation was not common in The Netherlands and therefore Interview with Jo Laycock and Kari Bo were invited to explain why a vaginal examination is important.

At ICS conferences I met colleagues from all over the world and heard for instance what is happening on the level of education around the globe. When I was asked to develop a course on the pelvic floor in The Netherland I said that both a vaginal and anal examination should be part of the curriculum. It was not easy to get permission to do the internal investigation, we really had to fight for it. The internal investigation was at first taught by gynaecologists and a surgeon. Students practiced on specially trained women who were otherwise involved in training medical students in how to perform an internal investigation. These women were very good on the emotional part but they are not really into the muscles and neither were the physicians. Therefore we nowadays teach the internal investigation ourselves and the students practice on each other. We take a lot of care regarding the preparation of the students.

Marijke got the opportunity to obtain a PhD, which is not very common in The Netherlands. She was invited by a gynaecologist to participate in a research project. At that time the research was still in the planning phase and that was such an opportunity. It gave her the opportunity to include particular research questions which are important for the pelvic physiotherapy. Her main question was: what is the relation between the ‘pelvic floor muscle function’ and prolapse. At that time there was zero on that topic. It was on the pelvic floor but not on the pelvic floor muscle. When all the data were collected and analysing started, the gynaecologist said to Marijke ‘you only have to write it down’. Do you want to do that yourself or do you want somebody else to do that for you? She was flabbergasted, so happy that she was asked if she wanted to do her PhD.